If you spend a lot of time outdoors, you probably have (or should have) a small first aid kit in your backpack or sport bag to take care of scrapes, cuts, insect bites, and other minor incidents. Consider adding a role of kinesiology tape to it as well.

As readers of this blog know, icing an injury should be the first line of treatment for a twisted ankle or other injury. Taping an injury is also critical to minimize pain and swelling.

Every Hiker and Walker Should Carry a First Aid Kit

A basic first aid kit should include kinesiology tape.

Most people do some kind of walking or hiking during their summer vacations. It’s a smart move to carry a first aid kit on these hikes.

How popular is walking or hiking? According to a 2014 report from the Outdoor Foundation, walking is the most popular crossover activity, meaning the common activity along with others like jogging and biking. More than half of all outdoor enthusiasts the foundation surveyed said they regularly walked

More people also reported that running, including running on hiking trails and jogging, was their primary outdoor exercise.

Add a roll of kinesiology tape to your outdoor first aid kit.

With all this leg activity, it’s a good bet that there will be an occasional sprain, particularly on unpaved or uneven surfaces.

It’s easy to throw together a small kit to tuck into a backpack or fannypack for short hikes. Here’s our suggested list: 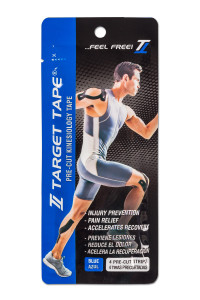 You can get all these in small packages and in blister packs. Longer hikes should include a few extras like insect repellant, spray or ointment to treat insect bites or poison ivy exposure, gauze, and sunscreen. Wear a hat, too, to protect you from sun exposure.

Carry More Water Than You Expect to Use

Water is a must. You can’t carry too much water and a lot of people don’t carry enough of it. Some hiking sites recommend a gallon per person for a day hike but some people will need more than that, particularly if hiking in hot or dry climates.

Don’t expect to find clean water sources on hiking trails. If you’re very reluctant to carry more than a gallon, consider stashing a couple of filled bottles along the trail for the way back, and store lots of water in your vehicle. Remember, too, that the load will lighten as you drink along the way.

Phoenix, recently debated closing hiking trails altogether when temperatures exceed 110º. Yes, it gets that hot in Phoenix, and often hotter during the summer. Last month, the temperature there topped 120º and six people died on hiking trails throughout the state as several heat records were broken. In Phoenix alone, first responders treated 141 hikers in distress during the heat wave.

In the end, the city council agreed to ban dogs from trails in temperatures over 100º. In addition to being more susceptible to heat exhaustion, hot surfaces burn their paw pads.

We're not around right now. But you can send us an email and we'll get back to you, asap.